We came upon this tradition kind of accidentally.  The kids were young. Grade school and younger. And we were all sick.  With a really horrible flu. The kind of flu where our bodies ached like we had run three marathons while being hit in the head with bricks.

Everything hurt.  Nobody wanted to move.  And everyone wanted me close.  I couldn’t be in everyone’s bed or even close enough if they were on our separate couches.  So we pushed our two couches together and made a sort of giant playpen.

We positioned the couches in front of the TV and near the wood stove to keep extra warm, pulled in pillows and blankets, and just hunkered down to wait the illness out. 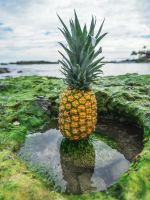 *As a side note that is also when we discovered the USA network TV series “Psych” was on Netflix.  It was a giggle in the middle of our horrible discomfort. It’s still a family favorite today, except we don’t only watch it when we’re sick, and it’s not on Netflix so we watch it on Amazon Prime or on DVD. (If you’ve watched the show you understand the pineapple.)

The warmth and coziness, the closeness, the comforting and commiserating, the space itself, made that illness a little more tolerable.

We all recovered, and it became our routine for when someone was sick.  But somewhere along the line we decided that playpens should be for times other than illness.  They were out of the ordinary. And they were fun. 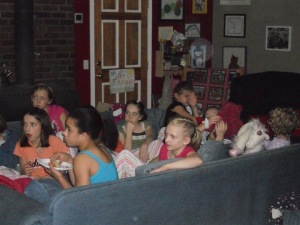 In fact one year Nina invited her entire gymnastics team for a birthday sleepover and they decided to “sleep” in the playpen (but not before they defied gravity by staging photos of flying over the playpen).

It was such an easy way to promote sibling bonding with all of them together watching a movie or having a sleepover.  Messes from snacks were contained to one area. Blankets easily folded and put away the next day.

We don’t have those matching couches any more , and we haven’t made a playpen in a few years, but it is still a fond memory.  Now they are more likely to make a “nest” using our sectional, an ottoman, and basically every pillow and blanket in the house.  They made one this year when everyone was home for Christmas Break.  The nest is bigger, which fits their growing bodies well, and just as cozy, the memories just as fond. 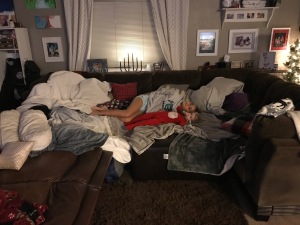 We highly recommend a playpen, nest, or any other possible configuration that brings your family together making cozy memories!!  Push those couches and oversized chairs together.  Throw in an ottoman, pillows, blankets, sleeping bags, stuffed animals.  Anything that makes it cuddly fun. Let life get a little messy.  A little unmastered.  A lot of fun.

View all posts by pammast

One thought on “Life in a Nest”