“All the little kids waiting for pictures with Santa were wearing their super fancy Christmas outfits.  We shoved two people in a sweater and called it good.” ~Nina 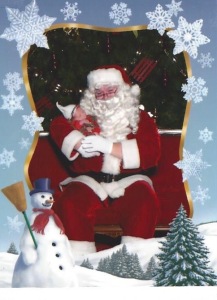 The tradition started when Trevor was one week old, and has continued for the past twenty one years.  The Mastrantonios go to the mall and take Santa pictures.

When they were little it meant those same matchy-matchy Christmas outfits Nina was referring to.  Now it is regular clothes or ugly Christmas sweaters. And while they would never actually admit it, I think

they kind of like the tradition.  Or else they pretend to so they won’t hurt my feelings. Either way I get a picture of all of them together, so I’m good with it. Even my brother, their beloved Uncle UB, said this year, “I used to feel sorry for the kids having to take Santa pictures at the mall, then I thought that poor Santa for having such big kids on his lap, but he looks really happy.”  So. . . . progress.

They laugh while waiting in line, discuss who is sitting on Santa’s lap this year, and make silly faces at all the babies and toddlers waiting in line too.  And my heart swells. Every year. With people bustling around us. Hurried and worrying, rushing to get this and that done. We are calm. We are happy. We are giggling at inside jokes.  We are slowing things down in spite of being at the busy mall. And I love it.

This year they decided to wear ugly Christmas sweaters.  The fifteen year old was missing her older sister so much that she chose a two person sweater for them to wear.

The nineteen year old was a little less thrilled about this. But 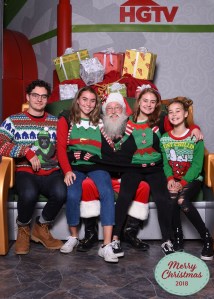 she was a good sport, and Santa loved it. He insisted that they be the ones to sit on his lap so he could poke his head over the top.  I couldn’t love it more.

I love our traditions, big and small.  I hope they will always want to take Santa pictures, and I hope that over the years the pictures gets bigger and bigger as grandchildren fill in the open spots.

View all posts by pammast